Sadly, Fantasy Football is not for those who happen to see the world through rose-colored glasses. This is especially true when it comes to running backs. In fact, because we are coming off the heels of a season where so many RBs returned immense value, the price tag placed on running backs in general has risen across the board. Higher price tags means higher probability of RB busts.
In a PPR, according the Fantasy Football Calculator, 10 of the first 13 players being taken are currently of the RB persuasion. Now, while that does signify a deep talent pool at the position, it also stacks the deck for some RB busts of truly epic proportion. There’s a case to be made that most of the top-end RBs can only be undone by injury. Though that technically might be true with their perceived workload, its not so much about the elite of the position.
Supply and demand is a simple concept. Everyone’s looking for a top-flight running back to hitch their wagon to, yet there aren’t enough to go around. Therefore, while we might not see the ramifications of that concept in the first two rounds, with ADPs rising to meet need, there are more than enough potential mis-priced RB busts to avoid on Draft Day.

At the start of training camp, Panthers coach Ron Rivera made a statement that really segmented the Fantasy Football industry. He claimed that Carolina sophomore RB Christian McCaffrey would see 200-plus carries this season after only being handed the ball 117 times in his rookie campaign. Either you saw this and doubled-down on the pass-catching savant or you rolled you eyes and laughed. Count me in the latter grouping trying to catch my breath.
McCaffrey finished finished last season as RB9 in PPR formats. While that positioning might seem fantastic considering his mid-second round value in 2018, I beg you to look at the larger picture. That placement hinged on several factors, most notably: injury. Leonard Fournette missed three games. Ezekiel Elliott missed six. And Devonta Freeman missed a pair – all men who finished within 32 points of McCaffrey by year’s end. That’s not even mentioning David Johnson – many people’s first overall selection.

Sure, injury is always going to be a looming presence in Fantasy Football. Yet one should at least acknowledge that it was longevity, not volume, that saw McCaffrey finish as an RB1 in his rookie campaign. Understand that a running back of McCaffrey’s size likely isn’t going to be the Frank Gore of his generation. He’ll be one of many RB busts most assuredly if he’s asked to run between the tackles more than he’s physically able.
The point here is not to detract from McCaffrey’s skill. Rather I am painting the picture that 2017 went almost as well as it could have for the Stanford product. Kelvin Benjamin was traded. Greg Olsen went down with injury. All of a sudden McCaffrey is leading all RBs with 106 targets. You have to bake in some regression there. Not to mention that Carolina has consistently ranked towards the bottom of the NFL in both pass ratio and pass volume. Those two things would usually be regarded as positives for a running back, yet not one that basically generates his value as a faux WR.
The Panthers threw the ball on just 53.0% of their snaps last season. They also ran the slowest paced offense in the NFL. With Olsen back and rookie D.J. Moore now in the mix, that seems like a recipe for disappointment when it comes to McCaffrey.

As we pour one out for the death of Mike Mularkey’s “exotic smash mouth” offense, let’s consider the timeline of events in this Titans’ offseason, shall we? New offensive co-ordinator and play-caller Matt LaFleur is hired on January 30th, with more than enough time to assess the team’s needs heading into free agency. Then, on March 13th, Tennessee inked former Patriots’ RB Dion Lewis to a $20 million four-year contact with an extra $3 million in incentives. I’m not saying there was a definite vacancy addressed. However, I think it would be foolish to just assume that the leftover from the prior regime, Henry, is going to dominate the new guy in this offense’s hierarchy.
Really, none of the coach speak from this summer has scared me off this philosophy. In early June, LaFleur referred to both backs as “1A and 1B”. Recent talk from Titans camp is leaning towards Henry leading the team in carries. Yet the lack of the term “touches” is key. I don’t doubt that by season’s end Henry will have more attempts than Lewis. Yet I would wager that Lewis has the majority of the team’s receptions out of the backfield and might even edge Henry in all-purpose yards. Considering he’s currently being drafted almost 25 picks after Henry, that seems like the guy I’d rather have on my squad in a PPR setting.
Its not like Lewis is some elderly slouch, either. Of the 32 RBs with over 150 carries in 2017, Lewis led them all in yards per carry with a 5.0 figure. Sure, some of that can be attributed to the Patriots’ offensive line finishing the year as the best run blocking unit by adjusted line yards. Yet to not at all credit the man himself would be a mistake. Football Outsiders actually ranked Lewis as their #1 running back in terms of production and efficiency from last season. This guy is going to earn his snaps.

No matter how progressive in style you think LaFleur will be, we have to accept that the NFL is now a pass-first league. Derrick Henry, who played in all 16 games last year, finished the season with just 14 targets. Maybe he scores 10 touchdowns this campaign and salvages his value. Yet that’s not the archetype of RB I’d favor in a timeshare, especially if his ADP were two full rounds higher in a PPR.

Of all the running back situations that I won’t be partaking in this draft season, this is the one I simultaneously understand the most in terms of what people are perceiving. Guys in better offensives tend to recoup value more often than not. “A rising tide lifts all boats” as the old saying goes.
Look no further than the Eagles when searching for a fantastic offense. Heck, they just led the NFL in points per game (29.0). Plus, a big reason for that success, even with an injured Jason Peters, was offensive line play. By Pro Football Focus, Lane Johnson was the fifth-best run blocking tackle in the NFL last year; Brandon Brooks and Stefen Wisniewski both ranked inside the Top-10 at guard; and Jason Kelce graded out as the #1 run blocking offensive lineman in football. Period. In a vacuum, how could a situation get more pristine for a RB?

Well, this isn’t about how the talent surrounding Ajayi is helping him. Its about how that surplus of quality pieces do more harm than good in a fantasy capacity. Behind that amazing five-man front, Ajayi went from averaging the fewest fantasy points per opportunity in a PPR (0.23) in seven games with Miami, to ripping off 5.8 YPC in Philadelphia. But he only saw 83 opportunities in the seven games he played in green and white. That’s just not enough volume for a fourth-round pick. Yes, LeGarrette Blount is now off in Detroit, but the Eagles brought back Darren Sproles, still have Corey Clement, and that’s not even mentioning recent draft picks Wendell Smallwood and Donnel Pumphrey. That’s a lot of mouths to feed.
The biggest issue of all to why I’m including Ajayi in the group of RB busts is reinforcement. The most carries in a regular season contest that Ajayi received with Philadelphia in 2017 was 15. That number grew to 18 in the NFC Championship game. However that was a very clear game script with the Eagles destroying the Vikings by 31 points. Doug Pederson realizes that its his offensive line, not his running backs, that are the key to his ground-based attack. There’s no point to force-feeding a single man when three can do the same job more effectively. Its not like I foresee Pederson changing this approach either. He only won a Super Bowl utilizing it last season. Ajayi will certainly be on of the RB busts in 2018. 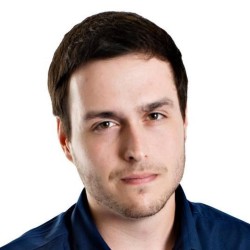 Follow Me!
Garion Thorne
Garion Thorne grew up in Toronto in the mid-2000s as a Jays, Raptors, Dolphins fan, so you know the only championships he cares about are of the Fantasy persuasion. Garion was a Host/Senior Analyst at the FNTSY Sports Network, most of the time taking a specific focus on Fantasy Baseball and deep baseball analytics. You might have also stumbled across his work for the New York Daily News, the Associated Press, USA Today's HoopsHype, or NBA.com. Garion keeps a FanGraphs tab open in his browser at all times and he has never seen a bunt he agreed with.