While the Chicago Cubs are an unfamiliar favorite to win the World Series, a breakthrough 2015 season has them pacing the field at sportsbooks and flying off the board early in Fantasy Baseball drafts.

#CubbiesIn2017 might even prove to have been too passive a billing way back in 2014.

Now, Jason Heyward and Ben Zobrist join the North Siders to extend the heart of order from top to bottom. And John Lackey projects to stabilize the middle of the rotation, which was an area of weakness last year. Plus, Fowler re-upped to man center field at Wrigley for another year.

With all the hype, though, don’t expect any bargains in your fantasy drafts and auctions. For the first time in a long time, the Cubbies could fare better in the real game than the virtual one.

The acquisition of another starter is still in the equation and would likely push Hendricks out of the fold. There is ample swingman depth currently with former starters Travis Wood, Trevor Cahill and Adam Warren all expected to take up residence in the bullpen.

There could be incoming upgrades here, too. Maddon never fully took a liking to rolling out Rondon in the ninth inning, despite the hurler returning 30 saves with a 1.67 ERA, a 1.00 WHIP. Grimm has value in deep formats because of his plus-ratios and 12.1 K/9, but it is unlikely he ever lands in the closer role permanently.

Anthony Rizzo, Kris Bryant, Kyle Schwarber and Jake Arrieta all project to be drafted in the early rounds, and Jason Heyward should have his best season since his monstrous 2012 showing.

Additionally, Jon Lester was a frequent tough-luck loser in 2015, and anything close to his 2.92 FIP and 9.1 K/9 from last season will play nicely as a No. 2 arm for your fake rotation. In fact, a fringe No. 1 fantasy return isn’t out of the question, and it’ll come at a discount.

Beware of reaching for Braynt and Schwarber, though. The easy path is throwing out the sophomore slump warning, but both have major strikeout concerns and could be potential anchors to your batting average column. Additionally, the asking price is steep, so don’t be choked up if someone else in your draft room antes up.

While there is still a chance Jorge Soler sports new digs before the season starts, his underwhelming showing last year has his 2016 fantasy stock ripe for profit. Even with Dexter Fowler re-signing and leaving Soler’s playing time murky.

A rough start followed by multiple stints on the disabled list kept Soler from gaining any traction at the dish last season. But he did launch six home runs through his final 51 plate appearances — including the playoffs — to finish the campaign.

Plus, Soler’s 27.8 line-drive percentage and 35.9 hard-hit percentage from last season highlight his 30-bomb upside. There will need to be a few breaks for Soler to earn enough at-bats, but in the later rounds you should be targeting talent.

Addison Russell will receive plenty of sleeper ink. But his .259/.318/.427 second half doesn’t jump off the page, and he may always be a better real-world player than fantasy asset.

Baez could line up all over the field, and the power-speed combo he offers in the endgame of drafts could return handsomely should full-time at-bats land in his lap. Like Soler, with Fowler back in tow, Baez is going to need a break or two to fully reward.

John Lackey enters his age-37 season after posting a career-best 2.77 ERA last year, and is being ranked extremely aggressive.

His 3.77 xFIP was inline with his 3.96 career mark, so Lackey was certainly the beneficiary of good fortune in 2015. His 82.6 percent strand rate was also the best of his career, and his .295 BABIP was the second lowest mark he’s ever posted.

With a 7.4 K/9 over the past three seasons, Lackey isn’t a plus-contributor in the strikeout column, either.

From a draft philosophy standpoint, you’re likely grabbing a respectable-floor, low-ceiling arm. And chasing upside over security is encouraged in the middle rounds more times than not.

Barring a slew of injuries, it is difficult to envision any prospects having a meaningful fantasy impact this season.

Arismendy Alcantara could land in a utility role and return fleeting value in cavernous mixed and NL-only leagues, and Willson Contreras and Ian Happ are intriguing hitters in the system.

However, in the majority of seasonal leagues, there is nothing to see here. The kids are already staples in the lineup.

What We Should Know About the 2016 Chicago Cubs?

If you’ve already purchased the streamers and balloons for the parade, you might have to keep them in storage longer than hoped. Rarely does a team undergo huge offseason turnover and put it all together immediately. The Detroit Tigers and Washington Nationals stand as recent examples.

Daily players should also be willing to take on this potent lineup with opposing pitchers. There is no reason to expect this group of young and aggressive hitters to improve their strikeout rate considerably. The Cubbies paced the league in strikeout percentage last season, after all.

While the expectations are soaring and putting the curse to rest is within reach, this isn’t a one-and-done season for Chicago. The Cubs project favorably for a number of years behind an emerging core of exciting players. 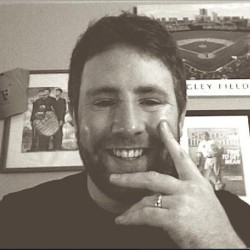 Follow Neil
Neil Parker
Writer at LockerRoomFantasySports.com
A loyal Cubs, Cowboys and Maple Leafs fan for decades, Neil covers baseball and hockey at USA Today Fantasy Sports, Rotowire and wears the C for The Fake Hockey. He would bust an auction budget for a nap.