Quick, name something more awesome than an Opening Day!

Besides all that – the Opening Day is the greatest thing ever! We’re going to celebrate it at “So-Called Fantasy Experts” by writing a 2015 Fantasy Baseball Opening Day live blog!

Check back with us throughout the day – and hopefully, we’ll keep you entertained.

Best day of the year. pic.twitter.com/XyCwRWUZj8

1:05pm — It’s obvious that Hostess loves #OpeningDay, too! Unfortunately, their tweet this morning showed they might mean they love NFL Opening Day a little more.

The games are getting ready to “kick off,” and we’ll be watching the Yankees and Blue Jays at Yankee Stadium to start the day, on ESPN. I thought about loading up on Masahiro Tanaka and a bunch of Yankees today, but I ended up going with Russell Martin and Dioner Navarro in a few games. I know Tanaka looked great this spring, but that Jays lineup is fo’ real. Weird to anyone besides myself that the Yankees’ lineup music was the Rebel Alliance theme from Star Wars? They really should just embrace that they are the Evil Empire and play the Darth Vader music only.

This … is just wrong.

First pitch of the year from David Price: Ball at 40 mph (per stadium gun). uh….

You have to love the Bleacher Creatures at Yankee Stadium chanting players names until they give them a nod or a tip of the hat. Very cool baseball tradition.

It’s #OpeningDay for the baseball season. What would your walk up music be?

No doubt, my walk-up music would be LL Cool J’s “Mama Said Knock You Out!” Tweet me yours @DavidGonos. Tanaka’s looking stroooooong early on, taking down the might Jays lineup on 14 strikes — three up/three down. But Drew Hutchinson betters him with just 13 pitches needed to get through a 1-2-3 inning. Is it too early to bring up that pitchers are usually ahead of hitters at this point of the season? … It is too early? … Crap.

You gotta go hot dogs for lunch on #MLBOpeningDay. pic.twitter.com/6CbAIWiNSj

Yeah, that’s right — I went ketchup and relish on one hot dog, and just straight mustard on the other. Save your “ketchup is for sissies and babies” talk.

1:50pm — I posted a chart for my top Daily Fantasy Baseball starting pitchers of the day earlier this morning. And Twins RHP Phil Hughes checked in as the worst of the day.

Very happy to see that forecast coming true, as he has already given up the first two home runs of the 2015 MLB season — to J.D. Martinez and Alex Avila of the Tigers.

RT @RaysBaseball: Here’s how your #Rays line up for #OpeningDay against the Orioles! First pitch at 3:10 ET. pic.twitter.com/nBrWdKbjJN

Speaking of Daily Fantasy Baseball and MLB lineups — have you ever checked out DailyMLBLineups.com? They do a great job of posting lineups every day as soon as they’re posted.

Chase Headley went to field a bunt from Jose Reyes and sailed it wide of Mark Teixeira, which allowed Reyes to run to second. Reyes doesn’t get the RBI, though, as it was scored a sacrifice.

Ohhhhhh no … Reyes is getting looked at by trainers at second base now. On the replay, you could see him pop up gingerly after rounding first base. This guy has has sooo many hamstring problems, that’s just not what you want to see.

He’s able to score on Russell Martin’s two-run single against his old team.

2:02pm — Somewhere, MLB.com’s Cory Schwartz is very happy — Edwin Encarnacion goes yard, knocking in Martin. The highlight of that, though, was that the Yankee fan chick in the bleachers decided to throw the ball back onto the field. She then hit someone in one of the front rows. Nice throw, Knoblauch.

Tanaka has four earned runs after three innings — and after such a promising start.

Alex Rodriguez comes to the plate — to a lot more cheering than jeering. Good for him. I know everybody hates the guy, but in reality, Fantasy Baseball owners should remember how great he was for our game. A shortstop with 40-HR power (juiced, sure, but still …), and I know he’s a big liar, but I can’t help but enjoy seeing him play again. He works the count full before finally drawing a walk to get on base.

Yankees fans are so nice pic.twitter.com/atsxaY0GVA

2:15pm — While the Yankees have had just one hitter reach base (A-Rod), the Twins have not gotten anyone on base after four innings.

Another 1-2-3 inning for Price … another fantastic defensive play contributing. #Tigers 3, #Twins 0 going to the bottom of the fourth.

Yoenis Cespedes robs Kurt Suzuki for the Twins first home run of the year, and we’ll be seeing that play for the rest of the day. Great grab, reaching over the wall to keep the early __-__ in tact.

Today is just Alex Rodriguez’s 8th career start in the 7-hole, and first since his rookie year of 1995.

2:23pm — Tanaka is throwing much fewer fastballs than he did last year, as the Yankees promised us he would, and it doesn’t seem to be working out well.

BlueJays seem to be figuring out Tanaka and all the off speed pitches he threw early on. @SoCalledFanEx

Esmil Rogers is warming up in the Yankees bullpen.

Tanaka has thrown 32 fastballs among his 75 pitches today — but maybe some of those fastballs were disguised as fast changeups.

#BlueJays jump out to 5-0 lead T3rd in the Bronx. A diff Tananka indeed: lots of off speed pitches …. He’s NO longer a dominant pitcher.

2:35pm — Brian McCann finally gets the Yankees into the “hit” column, as he takes a pitch into the right-field corner, moving Mark Teixeira over to third base. The Yankees strand him there anyway — four innings down in the Bronx. 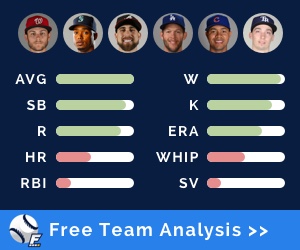 Kennys Vargas was also able to get a hit against David Price, so both early no-hitters are officially over.

2:45pm — The Rockies and Brewers game is officially underway, and Kyle Lohse wasted no time in getting into trouble.

Corey Dickerson follows up with a two-run home run and this has the makings of a 10-9 kinda game.

Today is only t/ 14th game in @Rockies history Tulo, Cargo, Nado, &Dickerson have ALL been in the starting lineup. All just did major damage

To say that the Rockies are seeing the ball well against Kyle Lohse is to do 20/20 vision an injustice. They’re mashing him, with three doubles and a home run after one inning.

Alex Rodriguez has now hit safely in his past 10 season openers, as he drives a fastball into the right-center gap for his first hit since 2013. He has gotten on base twice already, in two at-bats.

Cespedes is now a home run and a single short of hitting for the cycle on Opening Day.

Oh no the pull of #fantasybaseball is starting. The obsessive need to check box scores every 15 min is getting hard to resist @SoCalledFanEx

3:00pm — Have you listened to the “So-Called Fantasy Experts Podcast” yet? Travis Pastore does a great job as host each Wednesday.

FYI, Tanaka has a 9.00 ERA after his first start of the season (4 IP, 4 ER). “So much for his great Spring Training stats and getting some great stats out of him early before trading him,” said all of his Fantasy owners.

3:20pm — This Rays team is just ugly right now. And as excited as I am about Chris Archer’s season, he starts off with a bumbling effort to field a ball and throw it to first. He gets out of the inning with one run allowed on one hit, so the damage was limited. Hopefully, he’ll settle down in the second inning. He did touch 98 mph on the gun, however.

Besides Longoria everyone in the Rays lineup reminds me of those baseball cards you hated getting as a kid. Complete nobodies.

If you were one of those astute Fantasy owners to pick up Blue Jays second baseman Devon Travis, you were just rewarded for your efforts with a home run.

11 pitches in and the #Rays have yet to swing the bat.

Anyone else sick of hearing Cole Hamels complain about being in no-win Philadelphia? He has thrown 38 pitches through two innings, with two walks and a home run allowed to Dustin Pedroia. Shut up and pitch.

Cole Hamels worst month pitching is April. In 231 career innings, he owns a 4.05 ERA. Not pretty.

Archer has settled down now, and gotten past his throwing error to start the game.

Tanaka has now allowed at least 4 ER in 4 of his last 5 starts. He allowed fewer than 4 ER in each of his first 16 career starts

3:50pm — Rockies 3B Nolan Arenado currently leads all Fantasy scorers for the day, with a home run, a double, three RBI and two runs scored already. He’s at 70 points now for Draft Day. He’s also helping me in a Draft Kings double-up game. It’s always nice to see your DK handle above “Dinkpiece” in the live standings. (It would be nicer if I had that million bucks he won last year.)

Price, of course, is the top Fantasy pitcher so far on the day, with 46 points on Draft Day.

Oh yeah? I wonder how San will do this year. Or how about New? It’s “Tampa Bay.” There is no team in Tampa. Thank you, continue not knowing things.

Meanwhile, Archer has thrown first-pitch strikes to 13 of the 16 batters he has faced. But Travis Snider inexplicably tries to stretch a bloop single into a double — and Desmond Jennings throws him out. Archer gets through the top of the fourth inning unscathed.

Jaso is out of the game with a left wrist contusion after sliding awkwardly into second base.

Well, we’re wrapping up the live blog for the day — good luck on your night games!